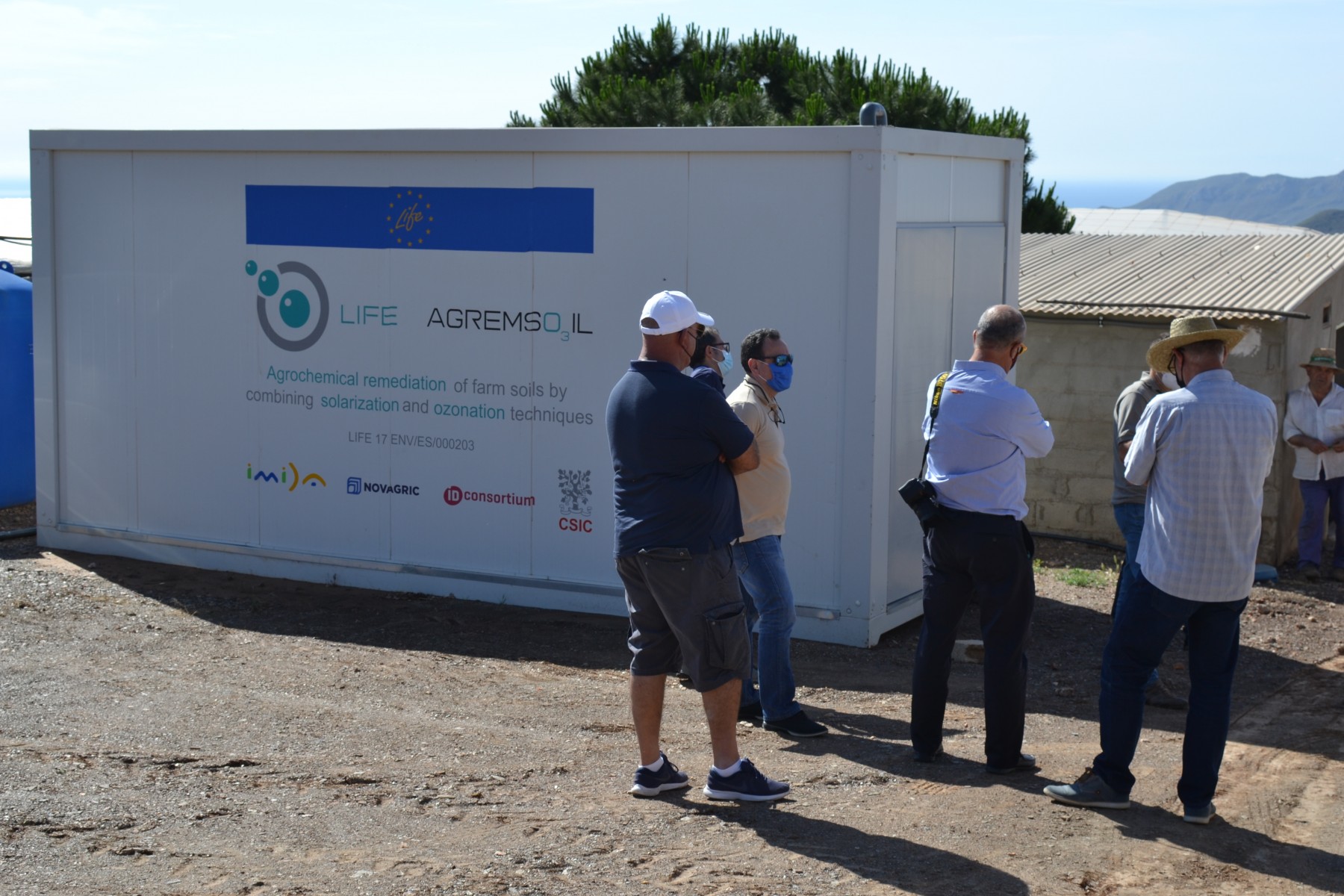 The first Life+ AGREMSO3IL project prototype was unveiled to its stakeholders.

Technical coordinator Jose Fenoll from Instituto Murciano de Investigación y Desarrollo Agrario y Alimentario (IMIDA) and the prototype engineer Andres Sanchez from Novedades Agrícolas presented the project and its initial results during its first field visit at its pilot site in Cuesta Mula farm, located in Águilas, Murcia (Spain). Pesticides in the soil are a highly significant environmental problem coupled with the increased use of harmful pesticides worldwide. There are no remediation technologies currently available to solve this increasing problem. The Life+ Agremso3il project is developing a technology that could eliminate the presence of harmful pesticides on farmlands. The initial result showed 63% of pesticide reduction in 1000 m2 of the greenhouse during the project's prototype unveiling. 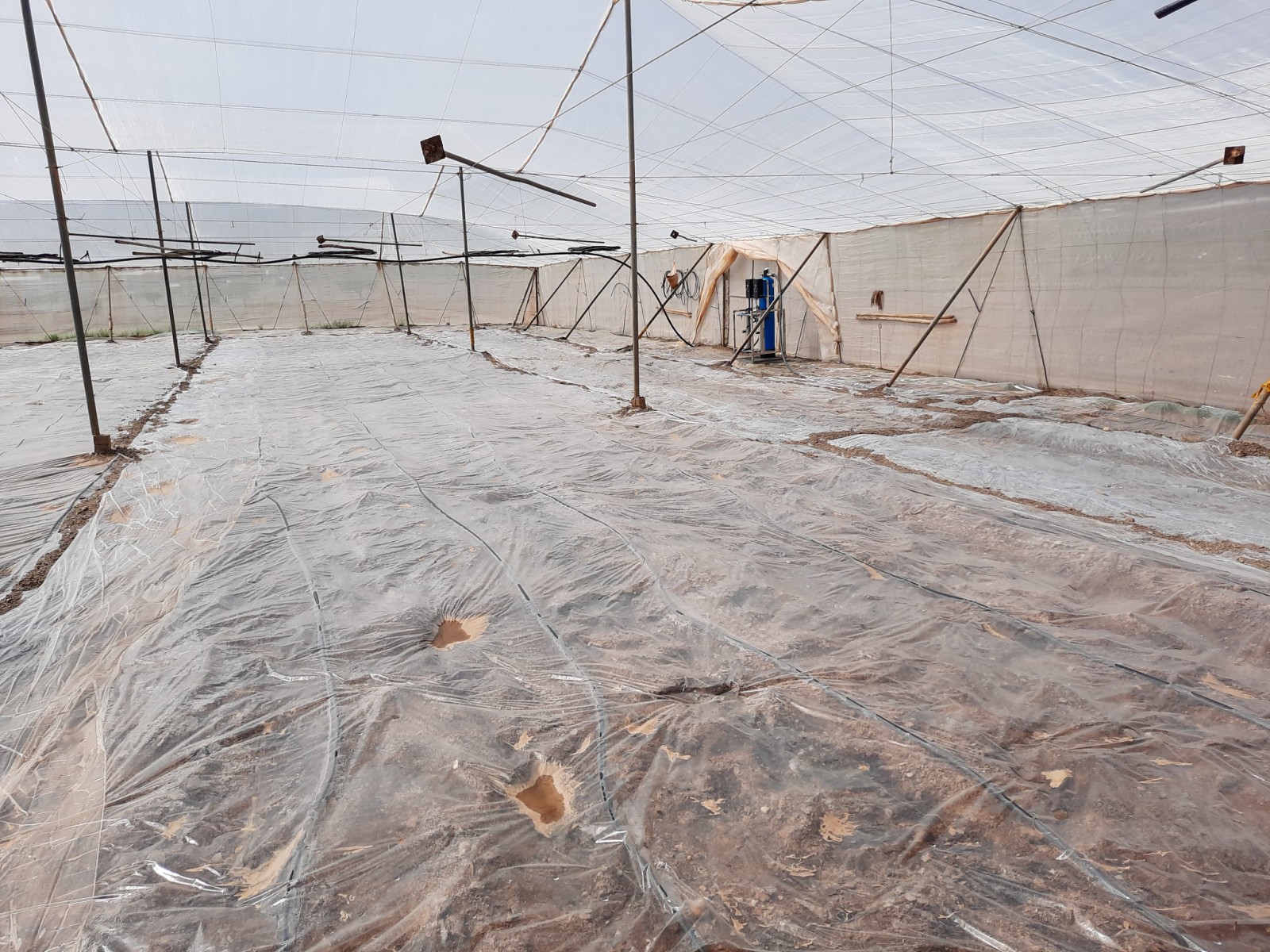 The pesticide residues in the soil are one of the primary concerns which require proper management. This system is an innovative solution to a worldwide problem. A more restrictive regulation in the future could derail the project's success. Time is of the essence in managing pesticide residues.

(Inside the greenhouse where AGREMSO3IL treatment is being applied)

This is how the system works and its basic technology. In order to implement this solution, the first step would be to clear the soil for cultivation. Once this action has been taken, the ozonisation and solarisation processes are carried out. The ozonation where it generates hydroxyl radicals using light radiation to attack and destroy any organic molecules to CO2, H2O, and mineral salts. Following this process, solarization takes the next step by placing transparent plastic on the floor bed during the summer months when temperature and light radiation are more intense. This system is a combination of solarization and ozonation techniques that remediate and disinfect farm soil. Several greenhouses were set up to allow for the solarization and ozonation treatment to be utilized. Since the ozone in water has a very short service life, which makes it difficult to manage, the project has since changed to gaseous ozone. The 1st field visit allowed the stakeholders to view the technology for themselves but they had some concerns as well; for example, the durability of the plastic used in the prototype. Is there a possibility that the plastic would leak? A trial on the experimental farm showed no leaks and even kept the ozone in close contact with the soil. No degradation of organic matter in the soil was also observed and soil quality did not suffer when the treatment was applied. Check out the recent scientific publication entitled "Combined Ozonation and Solarization for the Removal of Pesticides from Soil: Effects on Soil Microbial Communities" by Marta Díaz-López, Emilio Nicolás, Rubén López-Mondéjar, Lucas Galera, Isabel Garrido, José Fenoll, and Felipe Bastida: click here.

During the project’s prototype unveiling, the initial result showed 63% of pesticide reduction in 1000 m2 of the greenhouse. 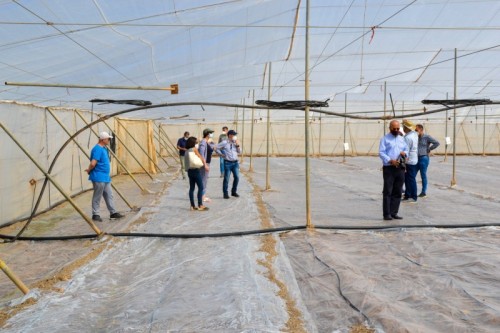 (Inside one of the greenhouses as stakeholders learn more about the Agremso3il treatment at the Cuesta Mula farm.)

The treatment's effectiveness showed promising and satisfactory results, which takes about 30 to 50 days to work, depending on the farmer's needs. But it is also worth noting that there are no sensors on the market that's currently available to measure the concentration of ozone in the soil. The lack of sensors makes it difficult to determine the relationship between the power of the equipment and the treated surface. Nonetheless, no degradation of organic matter in the soil was found and it was emphasized that soil quality did not suffer when Agremso3il treatment was applied.

The rest of the attendees showed great interest in testing the prototype on their farms. Surinver El Grupo and Fruca Marketing, for example, are quite optimistic about the success of the project. They believe that once the prototype has been proven very effective, they will be very interested in testing the prototype on their own farms. While Bonduelle Group was curious if the equipment is scalable to service a 30ha farm. If the project reached its desired result, Bonduelle would utilize the technology to gradually decontaminate 5-6ha of its farm every year for outdoor cultivation. As long as the prototype continues to show great progress, interests will grow and more farmers will apply the technology on their own farms, not just in Spain but all over the world.

The LIFE AgRemSO3il pilot project aims to develop new innovative technology, at a large farm-scale, using agrochemical remediation in farm soils by combining solarization and ozonation in situ. This innovative solution involves building new technological applications (giant equipment) and using methods that advance oxidation processes, which are called ozonation and H2O2; or solarization. The project provides a new cost-effective solution for this ongoing, silent problem while supporting the soil's true function as part of the wider ecosystem positively impacting the feed and food products produced, which have consequent effects on human health. The project also plans to integrate into its work Common Agriculture Policy's environmental objectives and promote EU's agriculture and environmental policies. Visit agremso3il.eu/ for more information.