Researchers from Universidad Politécnica de Madrid are participating in a project to determine how climate change modifies the natural dynamic of forests. 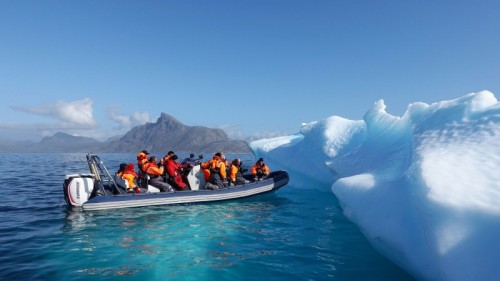 A research study carried out by several institutions, including Universidad Politécnica de Madrid is participating in a project to determine how climate change modifies the natural dynamic of forests. The study results, which have been published in the Forest Ecology and Management, suggest that oak will benefit from the current increase in temperature due to its resilience to new climate conditions. As a result, oak forests will have a competitive advantage versus beech forests.

Beech trees appeared in the Iberian Peninsula after the last glaciation and since then they have grown considerably around the country. This species needs shades to grow in the first stages of its development, thus they expand under the shadow of other trees. Beech is more shade-tolerant, has a greater production of seeds, and is more competitive than other species. The oak geographical distribution is similar to the beech distribution and is common to find a mixed forest where both species coexist. Oak is less shade-tolerant and has lower production of seed and thus this species is naturally displaced to areas of lower altitude, with worse soil and close to the forest margins. However, oak is a more drought-resistant species than the beech species.

Could climate change attenuate the dominance of beech and improve the competitive capacity of the oak? To answer this question, a team of researchers carried out a study in a forest located in the “Picos de Europa” National Park. Álvaro Rubio, a researcher from Universidad Politécnica de Madrid, says “our aim is to learn the influence of climate change on the competitive relationship between both species. They used a dendroecological approach, based on the measure of the tree-rings, to reconstruct the competitive capacity of beech and oak and developed a projection for the 21st century based on forecasted climate for this period. To carry out this study they performed a field survey consisting of 98 sampling plots occupying an area of 800 ha in the “Picos de Europa” National Park. Thus they obtained wood samples of each species.

After drying and sanding the wood samples, researchers measured the size of each ring. An index of competitive advantage was developed from these measures. This index measures the periods of time in which oak trees grow better or worse than beech trees. After, researchers studied the link between this index and the climate in order to project the values according to different climatic forecasts that have been made for the 21st century. 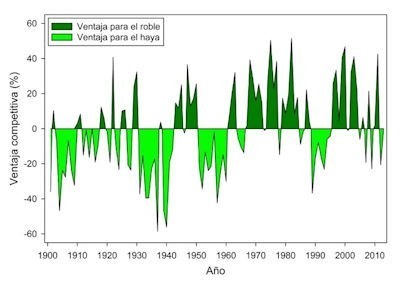 Competitive advantage of oak compared to beech throughout the 20th century

The results show that the periods of time in which oak trees grow better than beech trees have been increasing throughout the 20th century, especially since 1970 and this change is related to the change in temperature and rainfall during the 20th century.“Our results show that oak trees will be less likely to be affected by the climate change than beech trees”, said Álvaro Rubio. The progressive expulsion of oak trees that occurs when they coexist with beech trees can trigger that forests lose their competitive capacity to climatic disturbances. “In order to improve the competitive capacity is recommended carrying out active management of mixed oak and beech forests to avoid the expulsion of oak, which is better adapted to the climate conditions”, says Rubio. The institutions involved in this project are the following: Escuela Técnica Superior de Ingeniería de Montes, Forestal y del Medio Natural (ETSIMFMN-UPM); Instituto Pirenaico de Ecología (IPE-CSIC); Instituto Nacional de Investigación y Tecnología Agraria y Alimentaria (INIA); Instituto Universitario de Investigación en Gestión Forestal Sostenible (iuFOR), Universidad de Valladolid–INIA; Museo Nacional de Ciencias Naturales (MNCN-CSIC).