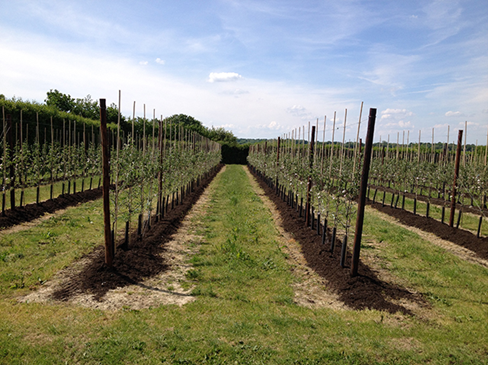 Soil organic matter (SOM) is one of the most important components of soil as it influences virtually all the properties of soil that control agricultural and environmental functions. Soil organic matter is difficult to measure directly, so laboratories usually measure and report its largest component, the soil organic carbon (SOC).

Despite the acknowledged agronomical and environmental importance of SOM, in the last decades a significant loss of SOC has been recorded worldwide, which has mainly been attributed to the cultivation of new land and the intensification of agricultural practices.

The reduction in SOM leads to a decline in soil fertility and the onset of several degradative processes such as erosion, desertification, compaction and nutrient deficiency. It has been estimated that roughly 2 billion ha of land are affected by degradation, which is over 30% of all land on earth. There is considerable concern that, if SOM concentrations in soils are allowed to decrease too much, then the productive capacity of soils will be compromised.

Besides the impact on soil quality and productivity of agricultural ecosystems, SOC losses present a significant impact on atmospheric greenhouse gases levels as 1 Gton (109 ton) C loss is equivalent to an atmospheric enrichment of carbon dioxide (CO2) by 0.47 ppm. SOC represents an important component of the global C cycle and constitutes the largest reservoir of terrestrial C stocks. It is widely acknowledged that land management options aimed at restoring past C losses from agroecosystems can significantly contribute to climate change mitigation, by long-term (i.e. > 100 years) removal of CO2 from the atmosphere into the soil, the so-called soil C sequestration. Therefore, due to the positive impacts of SOM on soil quality, ecosystem functioning and economical sustainability, it is of the utmost importance for the long-term prosperity of society to restore, maintain and increase SOM levels.

There are several soil management options that can be set up to recover and increase SOM and, amongst these, soil amendment with exogenous organic matter (EOM) is considered to be one of the more effective ways of restoring SOC and offsetting climate change. Exogenous organic matter is all organic matter of biological origin that is returned to the soil for the purpose of growing crops, improving soil quality and restoring or reclaiming land for future use. EOM includes organic residues from agricultural, urban and industrial origin as well as the products of their processing. Many activities generate organic wastes, including housing and urban activities (e.g. biowastes, sewage sludges and green wastes), industries (e.g. bioenergy by products), food processors (e.g. pomace) and agriculture (e.g. manures and crop residues). At European level, about 1.600 million tonnes of EOMs are produced each year, yet about 50% of municipal biowaste is not recycled in agriculture as it is disposed through incineration or landfilling.

Recently, the utilization of organic amendments is increasing due to legislative and environmental drivers favouring the agricultural recycling of a wider range of organic residues and enhanced social awareness about the importance of protecting the environment. The recycling of EOM on soils is strongly encouraged by the European Union, as a strategy to foster circular economy in agriculture, through different policies: (i) European Soil strategy aimed to the restoration of degraded soils and enhancement of soil fertility, (ii) European Green Deal and the Farm to Fork strategies which aim to decrease nutrient losses, soil pollution and the use of mineral fertilisers and enhance biodiversity, and (iii) the RED II directive promoting the development of renewable energy sources.

Organic residues recycling in agriculture is however only possible if their land application is not harmful for soil, crops and the environment. Generally, direct application to soil of fresh EOM is not possible, especially with high biodegradable residues, as it can lead to adverse effects such as anoxic conditions and production of phytotoxic substances. For this reason, it is advisable that before utilization as amendments, EOMs undergo some transformation processes leading to the stabilization of its organic matter. Furthermore, EOMs must be free from toxic compounds and plant and human pathogens.

The RUSTICA project will study and demonstrate the viability of 5 innovative conversion processes (carboxylic acid platform, microbial biomass production, electrodialysis, insect breeding and biochar production) to transform the residues from vegetables and fruit sector into effective and safe bio-based fertilisers. The processes can be combined depending on the available waste streams and integrated with state-of-the-art technologies such as composting.

The objectives of the Rustica project perfectly matches current environmental policies fostering EOM recycling in agriculture and the transition towards a circular economy. The bio-based fertilisers produced from the vegetables and fruit wasted represent a valuable resource that is re-entered in the agricultural sector providing benefits to farmers, society and environment. RUSTICA promotes the return of organic residues to the soil, under the form of stable and high-quality organic matter, contrasting SOM losses, soil degradation and climate change. In addition, bio-based fertilisers contain nutrients and their application on soils represent a potential substitution for synthetic and mineral fertilisers coming from fossil (for nitrogen) and non-renewable resources (mining resources for phosphorous and potassium). By increasing the recycling of nutrients, bio-based fertilisers may therefore improve the nutrient use efficiency. Utilization of good quality wastes and application of transformation process will guarantee the stability of the end products and the absence of toxic pollutants and pathogens, making bio-based fertilisers a safe and effective product to be utilized in agriculture.

Why is RUSTICA a multi-actor project? What is the sense of all these efforts in stakeholder engagement?
Stakeholders workshop in Pays de la Loire on 21st of October of 2021
Social challenges affecting bio-based fertilisers implementation
Stakeholders workshop in Valle del Cauca region, Colombia
The first workshop of RUSTICA project in Spain took place in Almería on 10th November of 2021
ICM-CSIC visits Universidad de Almería (UAL) facilities